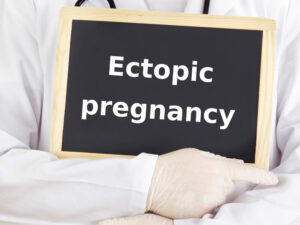 The human body is a complex network of parts and pieces that miraculously follow a blueprint laid out at conception. As soon as an egg is fertilized and travels through the fallopian tube and into the uterus, where it attaches to the uterine wall lining, cells begin to multiply. After a week or so, the fertilized egg has multiple cells, which form a cellular blob called a blastocyst that will eventually form a brain and spinal cord, these containing the human nervous and digestive system. Cell growth occurs when the budding fetus is nourished in the womb by the placenta that forms inside of the uterus to feed the growing fetus. However, when a fertilized egg never makes it to the uterus, getting stuck in the fallopian tube on its way down, the pregnancy cannot last.

An ectopic pregnancy refers to an abnormality wherein the fertilized egg develops outside of the uterus. In the case of an egg growing in the fallopian tube, this is known as a tubal pregnancy, and occurs in the vast majority of cases. And yet, it is possible that the egg can implant on the ovary or elsewhere in the abdominal cavity. A tubal pregnancy lasts only so long as the growing egg can expand inside the tube, which typically bursts if not caught soon enough, ultimately causing hemorrhaging. Most ectopic pregnancies are tubal pregnancies. The condition is dangerous to the mother and deadly to the fetus. As such, it must be diagnosed and treated in a timely manner to prevent extreme medical complications and possibly even maternal death.

Who is at Risk for Ectopic Pregnancy?

In addition, ectopic pregnancy is more likely if a woman becomes pregnant while using an IUD or after having her tubes tied, which refers to the closing off of the fallopian tubes. Lifestyle factors also play a role in increasing the risk for ectopic pregnancy. Women who smoke cigarettes, have undergone in vitro fertilization or other reproductive treatment for infertility, and older women (over 35) are also most likely to develop ectopic pregnancy. Even those without any of the known risk factors can also have ectopic pregnancies.

What are the Signs of Ectopic Pregnancy?

Women with this condition may experience symptoms early on, such as unusual cramping on either side of the pelvis or pain in the abdominals. They may notice vaginal bleeding or pain in the lower back too, but all these signs may appear like early pregnancy symptoms, especially to the first-time pregnant woman. However, doctors typically warn pregnant patients to report bleeding, which is not a usual pregnancy sign. Once the fertilized egg begins growing larger, the severity of the symptoms become more noticeable. The abdominal or pelvic pain becomes more severe, and it may be accompanied by dizziness, weakness, or shoulder pain, especially as the fallopian tube expands and eventually breaks open. When the fallopian tube ruptures, this is an emergency situation, as it can cause potentially fatal maternal hemorrhaging.

Barring the obvious signs, an ectopic pregnancy may be detected during a physical exam in a routine office visit. Pelvic exams and sonograms are common in the early stages of pregnancy to locate the baby and confirm its growth. Blood tests are also common to check for everything from anemia to blood sugar and human chorionic gonadotropin or hCG, the hormone that is produced during pregnancy.

If an ectopic pregnancy is confirmed, the pregnancy will be terminated by drugs or surgery. Using drug therapy to terminate the pregnancy, methotrexate is frequently injected into the pregnant woman and then causes a miscarriage. However, this method can only be used if the fallopian tube has not already burst. Sometimes it takes a second injection if blood tests show the presence of hCG after a first injection because the growth of the fetus continues unless confirmation of the pregnancy’s termination by hCG levels having sufficiently decreased. The problem with this method of terminating the pregnancy is methotrexate may have uncomfortable side effects, like vomiting, abdominal pain, and dizziness.

If the fallopian tube bursts, emergency surgery is required to stop the bleeding. In addition, laparoscopic surgery may otherwise be required to remove the tube or the ectopic pregnancy, especially if the patient has allergies or other reasons not to take methotrexate. Under general anesthesia, this medical procedure is performed with a small camera inserted through a small surgical opening.

Even after termination of the pregnancy, the feeling of being pregnant usually remains for a time, until menstruation normalizes. Many women suffer emotional distress and depression after the ectopic pregnancy experience. Moreover, they become more susceptible to future ectopic pregnancies or, if the tube burst, it may be more difficult to get pregnant again.

OB-GYNs are specialists in reproductive, pregnancy, and childbirth care. Their expertise is supposed to prepare them to prevent avoidable mishaps due to their own negligence. As such, obstetricians and gynecologists of pregnant patients with a history of ectopic pregnancy, infertility treatments, and STD’s must pay careful attention to reported symptoms that may seem like normal pregnancy signs but could be ectopic pregnancy warnings. If a doctor ignores the potential warning signs of an ectopic pregnancy or fails to order the appropriate blood tests and sonograms to confirm an ectopic pregnancy, the consequences can be devastating. A pregnant woman can lose her fallopian tube or her life from bleeding profusely before the problem is discovered. Given the symptoms of weakness and dizziness, a woman can faint in a public restroom and then found too late to be helped. It is critical that the condition be diagnosed early to avoid catastrophic results to the expectant mother and her family.

In addition, treatment must be swift and competent. Upon diagnosis, a doctor must act quickly to avoid further damage caused by a tube rupture. And if drug treatment is the preferred method to end the pregnancy, the doctor must monitor the woman and ensure that they follow up with further blood tests after the first injection of methotrexate. It is crucial to confirm and ensure that the pregnancy has terminated. If not, the patient risks severe complications as the fetus continues to grow outside of the uterus. Again, the result can be excessive bleeding for the mother, infection, or other internal damage, preventing future pregnancies.

When providing prenatal care, a doctor who overlooks symptoms of ectopic pregnancy, especially when a woman’s chart reveals risk factors for the condition, may well be deemed negligent. In the eyes of the law, medical negligence refers to a professional whose conduct in a given scenario shows them to be practicing medicine below the medical professional standard expected of them and all doctors who may be in the same situation.

Can I Sue for Misdiagnosed or Untreated Ectopic Pregnancy in NJ?

If your doctor failed to diagnose or properly treat your ectopic pregnancy, you may have grounds for a medical malpractice lawsuit. You have the right to be compensated for your economic, emotional, and psychological losses due to any doctor’s or medical providers negligent behavior with regard to pregnancy complications. Speak with a New Jersey Ectopic Pregnancy Malpractice Lawyer today for compassionate, specific guidance and zealous representation. Simply contact us at (866)-708-8617 for a free consultation.